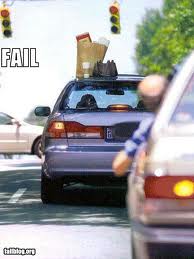 Help! How can I fix my awful memory? I read stuff for class and immediately forget what I just read. I study, but nothing seems to stick. I just forgot who I was writing this email to.

Barring any recent head trauma, I feel pretty safe in saying–no offense–you are W.R.O.N.G., wrong! I call “foul!” You have unfairly maligned your memory. No doubt it sulks in some moldy corner of your cranium awaiting an apology that will–let’s face it–probably never come.

Try this little experiment with me. I promise it won’t hurt, and it doesn’t involve needles or wearing a hospital gown with a full-disclosure policy. Ready? Here we go…

Think back to some HUGEOUS event in your past. Perhaps a happy event, such as… 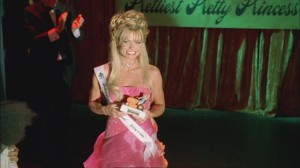 Or, perhaps a NOT happy event…

Whatever the Big Event you thought of, I’ll bet you my autographed copy of Chuck Norris’ red, white, and blue sweat band you can recall all sorts of (often completely irrelevant) details concerning said event; the time of day, where it happened, what you were wearing, who else was involved, how long it took the cops to show up, where you were going afterwards, the jealous glint in the other contestants’ eyes as they placed the tiara upon your dewy brow. You remember many of those things, yet you did it without cramming all night, without flash cards, and without meticulous and detailed notes.

No offense, Amy, but it sounds as if your memory skills are better than you claim. So your question is–no offense–very meh. What you should have asked is, “Why can I recall some things so well?” and it’s corollary, “How can I apply this to recalling my studies?” Those are much better questions, Amy. Well done!

Get my Study Skills ebook now!

Why can you recall some things so well? 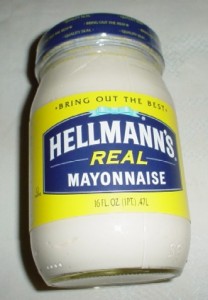 What is it, exactly, that makes your Big Event so memorable? I would be willing to bet my genyoowine smurf-hide chaps that the event was emotional for you.  Perhaps you felt stark terror as your new cell mate, Mama Nubs, offered to let you rub her bunions in exchange for all your worldly possessions. Or perhaps it was the thrill of in-yer-face ecstasy as,  during the talent portion of the Prettiest Pretty Princess competition,  you showed that snotty Stacy what REAL talent is by correctly identifying no less than three different brands of mayonnaise in a blind taste test. Either way, emotion ROOLZ when it comes to memory. Emotions are highlighters for your brain.

What else makes that Big Event memorable? It was probably unusual. It’s not every day you learn how to make toilet wine from the likes of Mama Nubs.  How about multi-sensory? Can’t you just taste the vaseline on your teeth as you unleash that 100 megawatt smile on the panel of judges? Or howzabout hearing the murmur of delighted surprise that rippled through the crowd as you smacked your lips and shouted “Hellmans!”

Lemme sum up. In terms of memory your Big Event is stickier than small, dead tree branches because it was emotional, unusual, and multi-sensory.

Get my Study Skills ebook now!Find out more about The Secrets Smart Students Know

How can you apply this to recalling your studies?

Obviously, you need to make whatever you’re trying to recall more emotional, unusual, and multi-sensory. You need to create what the learned gurus of yesteryear referred to as mnemonics (the first M is silent). Mnemonics is simply a fancy-shmancy term for memory skills or tricks. Lemme give you some examples of mnemonics to help clarify.

Perhaps you are reading a textbook so boring that zoos use it to sedate rhinos when tranq darts aren’t doing the trick. Perhaps the title of said book is, Molds, Fungis, and Rusts of the Jersey Shore–and you read therein, “Macrobiologists are often surprised to discover that very little is known about the native ranges of many fungi.” This cries out for mnemonics. Memory skills to the rescue! In order to make this emotional, unusual, and multi-sensory, make it into a false memory. To do this, imagine this scene…

A group of macrobiologists is talking to a mycologist (a biologist why studies fungi). You can tell the macrobiologists by their lab coats, pith helmets, and subtle aroma of formaldehyde. The mycologist is a grubby little man with mole-ish eyes and toadstools growing on his lab coat. He smells like horse manure and portobello mushrooms. The macrobiologists are slapping their foreheads and throwing their pith helmets to the ground in consternation as one of them yells, “What do you mean, you don’t know the native range of this mushroom? How could you be so irresponsible. Why, we could all be attacked by a raging Agaricus sylvicola intent on defending it’s territory!” As he shouts and spittle flies, the poor mycologist hangs his head in shame.

Emotional? Check! Multi-sensory? Check! Unusual? Check and mate! In fact, it’s downright freaky weird, and also hard to forget. Did I mention memory skills? Congratulations, Amy, you’ve just joined the elite ranks of the mnemonics makers. Let this sort of imagery ooze through the dark and fetid folds of your frontal cortex as you study, like directing your own demented movie. A movie loosely based on the book. Who says the book is always better? Prove them wrong. Eat your big-budget heart out, Spielberg!

“But coming up with this wildly implausible memory-skills-false-memory-movie-production-thingy will take too long!” you moan. No offense, Amy, but stop yer whinging, and wipe that prison wine off your chin. It does take longer than just reading straight through and not remembering any of it. It does NOT take longer than just reading straight through it three or four times in the vain hope something will stick while you fight off the tranquilizing effects of the textbook with mug after mug of vaguely lysol-y toilet wine made with espresso, red bull, gingko biloba, caffeine pills, and a dash of Sriracha for flavor. Plus, you get way quicker with practice. Plus, you’ll have a mind like a steel trap, only the trap isn’t made from steel it’s made from Chuck Norris’ chin stubble, and the trap isn’t a trap, it’s a monstrous black hole at the center of the universe from which not even a teflon-coated laser-beam smeared with yak butter could escape!

Get my Study Skills ebook now!

You’re aged wheezy professor is lecturing on Processed Meats During the Middle Bronze Age. The PowerPoint slide has this tasty morsel in Comic Sans at bullet point number two: “Babylonians often made a mash of shredded horse meat, lentils, honey, and spices, to take with them on long overland treks.” 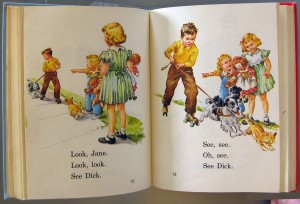 Your fertile and fevered imagination sets to work converting this sentence into a false memory. For some reason, it morphs into a Babylonian Dick and Jane story.

Jane-asari is doing something in front of the ziggurat. What are you doing, Jane-asari?

See Jane-asari mix lentils (I don’t know exactly what lentils looks like, but that’s okay. I just imagine peas covered in dryer lint), and honey, and spicy peppers, into the horse meat.

“Your story sucks Babylonian horse meat!” you say. Thanks soooo much for your editorial input, Amy, but–no offense–anyone with a tattoo that says, “Mama Nubs Lubs Me.” should just keep her opinions about other people’s children’s stories to herself.

Anyhoo–Amy–even a–no offense–jailbird prison-wine lush with misspelled tattoos should see that even the most boring-ist topics can be made very hard to forget with a heaping helping of unusual, multi-sensory, and emotional mnemonics.

*Amy Neesha and her letter are purely fictional. Any similarity to persons, living or dead, is purely coincidental. Unless it sounds like you. In that case, it is unfictional and non-coincidental.